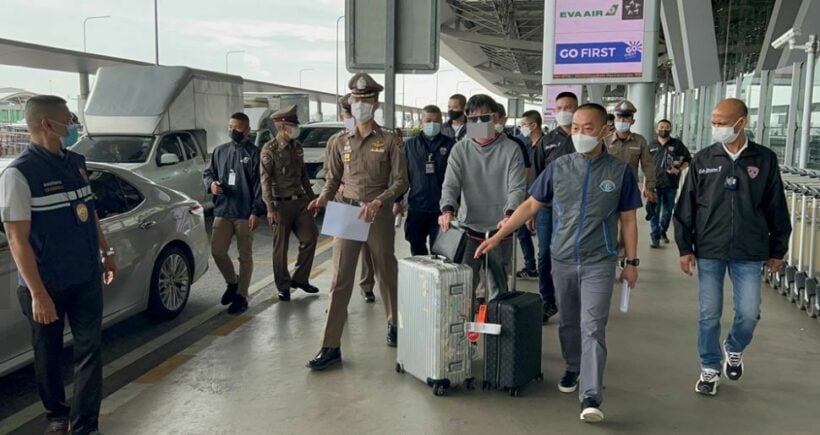 Today, Thailand’s Central Investigation Bureau arrested the fraudulent owner of Daruma Sushi, a famous Japanese restaurant chain, at Suvarnabhumi Airport. “Metha” returned to Thailand today having fled to Dubai in the UAE on June 16, after he received over 500 complaints from unhappy customers and staff.

Police said Metha caused damages equating to more than 100 million baht to customers and employees of his 27 Daruma Sushi restaurants.

Metha sold thousands of sushi vouchers for just 199 baht each, reduced from 499 baht. The vouchers were snapped up by sushi lovers, but soon enough Metha closed down all 27 Daruma Sushi restaurants and fled the country.

Today, Metha returned to Thailand to face the chaos he created. Police were waiting for him and arrested him at Suvarnabhumi Airport. The CIB reported the news on their official Facebook page at 2:30pm this afternoon.

The owner of a popular Japanese buffet restaurant, Daruma Sushi, made a slippery getaway from Thailand last week leaving a trail of chaos behind and complaints from over 500 people. A number of those people had lodged fraudulent complaints against the owner with the police and the consumer protection agency.

The owner disappeared a day before he closed all 27 Daruma Sushi locations. Immigration records reveal the owner, whose identity was not revealed, left Thailand alone for Dubai last Thursday at 11pm.

The commotion began shortly after the owner advertised e-vouchers for a salmon buffet were available for only 199 baht. Salmon fanatics jumped at the opportunity, with some purchasing over 2,000 e-vouchers and reselling them for a profit.

Hundreds of people who shelled out money for the offer have suffered financial losses estimated at 100 million baht.

The Office of the Consumer Protection Board received a considerable number of complaints from victims claiming they had been fraudulently sold the vouchers. The sale seemed strange, according to the board’s secretary general, Prateep Charoengulpa.

“Offering a promotion with a discount from 499 baht to 199 baht to boost sales of the e-voucher, which is normally sold 5 to 10 per order, is highly suspicious from the beginning. It looks like a scam from the start.”

E-vouchers used instead of ones made out of paper make it easier to destroy any fraudulent evidence that could potentially be used against the owner.

Last month, the owner of Daruma Sushi told his franchisees in a LINE group chat that he was having trouble securing salmon supplies and then lost communication with everyone in the group.