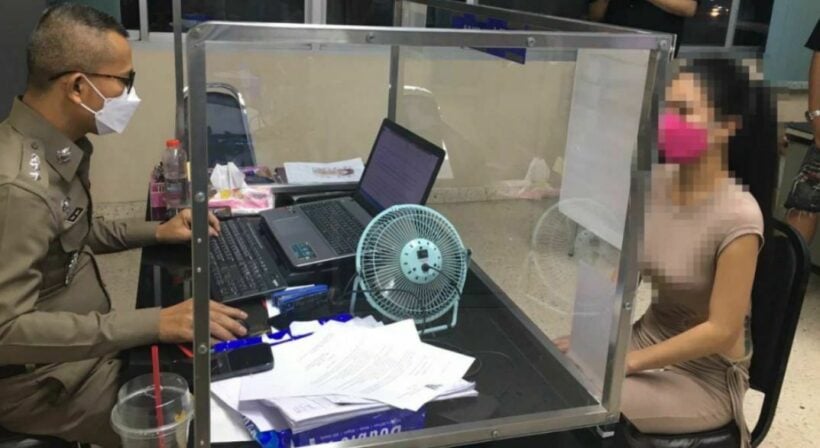 Thai model and DJ “Oil Kissyface” has been slapped with another 5,000 baht for more sexy antics.

Oil was previously fined 5,000 baht under the Public Obscenity Act after a video of her dancing topless at a nightclub in Khon Kaen last week went viral on social media.

After news of her fine caught the nation’s attention today, another video of her dancing naked at a different venue went viral, so police fined her another 5,000 baht.

Oil admitted the footage was filmed at “Toy Station” – a nightclub disguised as a restaurant – in Pathum Thani in central Thailand at around 11.30pm on July 31. She said she went to the venue to celebrate her friend’s birthday and was drinking alcohol, which is why she took off her clothes, she said.

Officers from Lam Luk Ka Police Station caught wind of the sexy video and went to investigate at Toy Station last night. The 24 year old venue owner Wanchai Kertsawat said he had no idea the naked dancing took place and claims he was passed out by that point of the night.

Alike the Khon Kaen venue, Toy Station was found to be operating as an entertainment venue without a license, which the police are now investigating.

A sexy Thai model has been fined 5,000 baht for a public obscenity act after a video of her went viral dancing topless at a nightclub in the Isaan province of Khon Kaen. The nightclub was also fined for operating without a license.

Paphavee “Oil” Chaimongkol, aka Oil Roi Joob, which means Oil Kissyface, was working as a DJ at the Sook San Khon Khan nightclub on Thursday, August 4, in the Mueng District of the northeastern province of Khon Kaen, when she decided to strip down to her underwear, get her boobs out, and dance for the audience at about 11.50pm.

The 25 year old was videoed dancing topless and allowed partygoers to slip cash into her panties. Needless to say, the video went viral.

Many netizens shared and commented on the post, some were happy with the sexy video, while others said it was inappropriate, including the police.

The Superintendent of the Mueng Khon Kaen Police Station, Preecha Kaengsarikij, reported that both Oil and a 20 year old nightclub managing director, Paramet Akkahard, had been prosecuted.

Oil was charged under Thailand’s Section 388, Public Obscenity act: Any person who performs such a disgraceful act in public by undressing himself, exhibiting his undressed person, or committing any other act of obscenity shall be liable to a fine. The fine is usually 500 baht but Oil was hit with a 5,000 baht penalty, which she paid yesterday.

Paramet was charged with violating the Entertainment Place Act, Section 26: Operating an entertainment place without a license, which will result in a penalty of up to one year in jail, a fine of up to 60,000 baht, or both.

Preecha informed the media that police are still gathering more evidence to process the next step with the court.

Paramet admitted that the nightclub was registered as a restaurant. He made it known that he had submitted the relevant documents to open the venue as a nightclub, but the application had not been approved yet. He added that he hired Oil as the venue’s DJ to draw in more customers.

Oil told the media she hadn’t done anything like this before and added that the nightclub didn’t ask her to do it. She admitted she did it because she was drunk.

The popular model said she was sorry for what happened and posted a video message on Facebook to apologize. Oil added she would continue as a DJ but wouldn’t let this happen again.

Oil is one of Thailand’s most famous models. Her aka comes from the kiss tattoo on her chest. She began her career as a Playboy Thailand model and continues making sexy videos on Facebook and TikTok.