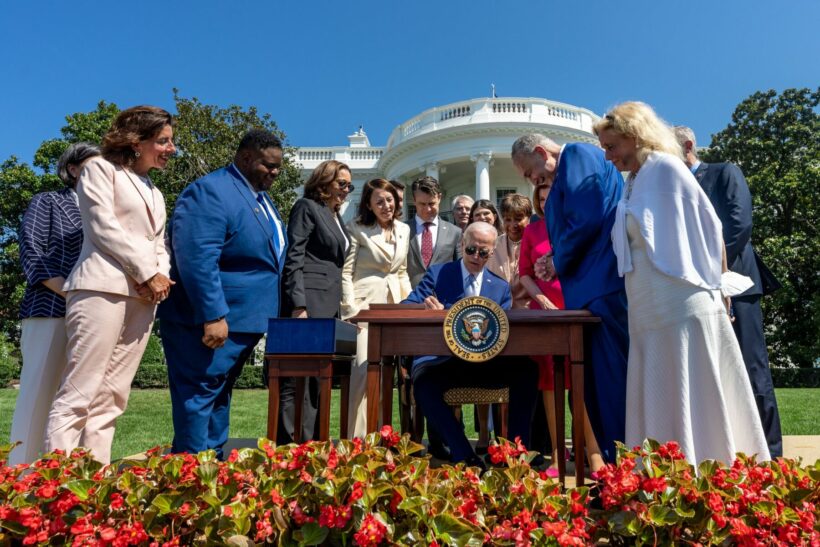 The Federation of Thai Industries (FTI) made it known yesterday that they feared China’s trade embargo with Taiwan would affect business in Thailand, particularly in the automobile industry.

The FTI said the car industry was anxious China would deny Taiwan the raw materials Thailand needed to make semiconductors that the Thai transportation business is dependent on. Those fears remain in the short term but in the long term, there is some good news for the Thai car industry.

Yesterday, US President Joe Biden signed into law a multibillion dollar bill boosting domestic semiconductor and other high-tech manufacturing sectors that the US fears are being monopolised by China.

The Chips and Science Act includes around US$52 billion to promote the production of microchips and relatively hard-to-make components at the heart of almost every modern piece of machinery.

Biden said that the cash injection from the Chips Act will help win the economic competition in the 21st century.

“Entrepreneurs are the reason why I’m so optimistic about the future of our country. The Chips and Science Act supercharges our efforts to make semiconductors here in America.”

Since the Democrats took office early last year they have been keen to revamp the tech industry and become a world leader in cutting-edge innovation once again. Over the past ten years, the US has seen China overtake them in the smart tech industry. The lion’s share of US innovation evolves from the private and entrepreneurial sector whereas industry in China is backed heavily by the state. Maybe there’s a clue in that line that investing in the public sector isn’t such a bad idea after all.

Semiconductors are of particular concern because they are a vital component of everything from washing machines to sophisticated weapons and nearly all of them are made abroad.

Ironically, the semiconductor was invented in the US but the country only produces about 10% of global supply, with 75% of US supplies coming from east Asia.

US Chamber of Commerce vice president Neil Bradley yesterday stated that the signing of the bipartisan Chips Act is a historic investment in the US’s future.

“It will boost microchip production at home, strengthen our supply chains, increase domestic research and development, and bolster our national security.”