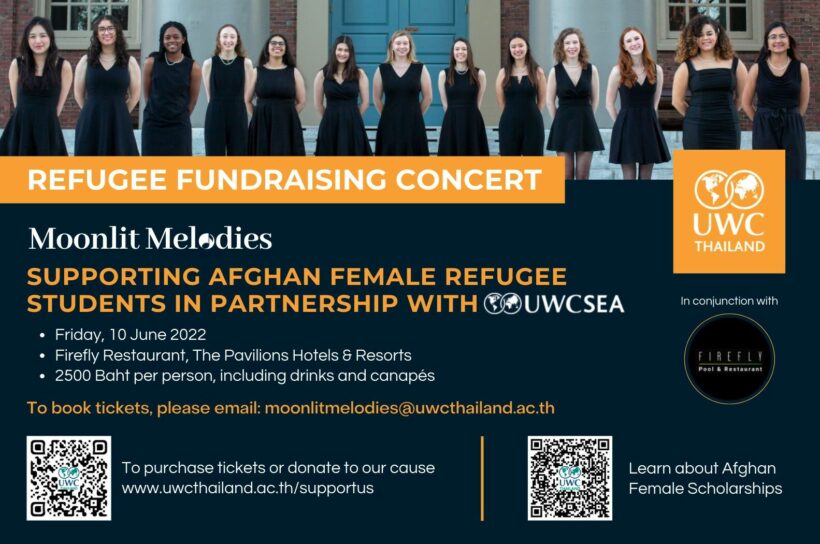 UWC Thailandwill be hosting a fundraising concert, Moonlit Melodies, on 10 June 2022 at the Pavilions Hotels & Resorts Firefly Restaurant. The highlight of the evening will be performances from theHarvard Radcliffe Pitches, an acapella group comprised of 13 Harvard undergraduates, including a UWC alumni. This exceptional group of treble-voiced musicians is dedicated to preserving and performing the jazz standards and American tunes that have impressed audiences for generations.

In partnership with its sister campus,UWC South East Asia, UWC Thailand has committed to supporting female Afghan refugee students joining UWC Thailand in August 2022 for their final two years of secondary school. For one night only, the Moonlit Melodies Fundraising Concert aims to raise funds in support of Afghan female refugee student scholarships. Afghanistan is one of the most difficult countries in the world in which to identify as a woman. Afghan women and children often face insurmountable challenges – from political and economic insecurity to lack of access to education, sexual violence, and poor health conditions.

With a 50 year history, UWC schools and colleges worldwide have impacted thousands of lives. The global mission of the United World College movement is to make education a force to unite people, nations and cultures for peace and a sustainable future. As one of the only UWC schools in the ASEAN region able to accept students with refugee status and from conflict areas, UWC Thailand welcomes students from conflict zones to complete the final two years of their high school education. It then stewards them to post-secondary studies in the United States and worldwide. In the words of a current female refugee student, “Maybe it is just a scholarship for you, but for me, it is my whole life.”

There are 150 tickets available for Moonlit Melodies at 2 500 Thai Baht per person, including drinks and canapés, with all proceeds directly supporting Afghan female refugee students. Come enjoy this unforgettable night in Phuket and support students in need at the same time!