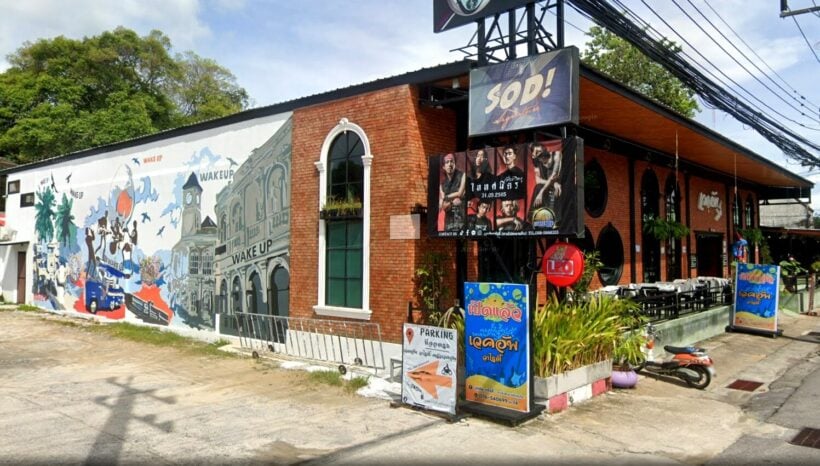 A month-long closure has been ordered for the Phuket nightclub venue that was the site of a fatal shooting earlier this week. The punishment was handed down yesterday by Phuket Vice Governor Anuparp Rodkwan Yodrabam and went into effect immediately.

The nightclub and karaoke bar named SOD was open after legal operating hours though it was said to be closed by the time a security guard shot a customer in the chest outside the venue, killing him. The latest information on the incident suggests that the club had been open until about 4am and customers lingered after closing due to a rainstorm. Entertainment businesses are only allowed to be open legally between 6pm and 1am, so the venue was punished with the closure order.

The owner of the club said that the venue was about to close but had remained open after hours because it was raining outside and several customers stayed inside to keep dry. The shooting came as a result of security guards intervening in a fight between a male and female customer who had already left the bar and were quarrelling outside.

The owner of the club explained that one guard saw the couple fighting outside the venue heatedly and stepped in to break up the argument. The man brandished a sword and slashed at the guard, prompting another guard nicknamed Odd to pull out a gun and shoot the customer.

The security guard immediately surrendered when the police arrived and handed over his weapon, which was registered but did not have a permit for concealed carry. He’s now being charged with murder, though he plans to fight it on grounds of self-defence.

Meanwhile, the nightclub was clearly open at least three hours after the legal closing time, and also allowed a security guard to bring a gun into the venue without proper permitting. The Vice Governor explains that the excuse that the venue was closed but customers remained inside due to the rain was not sufficient enough and the nightclub deserves to be closed.

The business’s license has been temporarily revoked, going into effect yesterday and lasting until September 3. The venue will remain under closure order for this 30-day period before being allowed to reopen.

Best fine dining restaurants in Bangkok to try this August (2022)