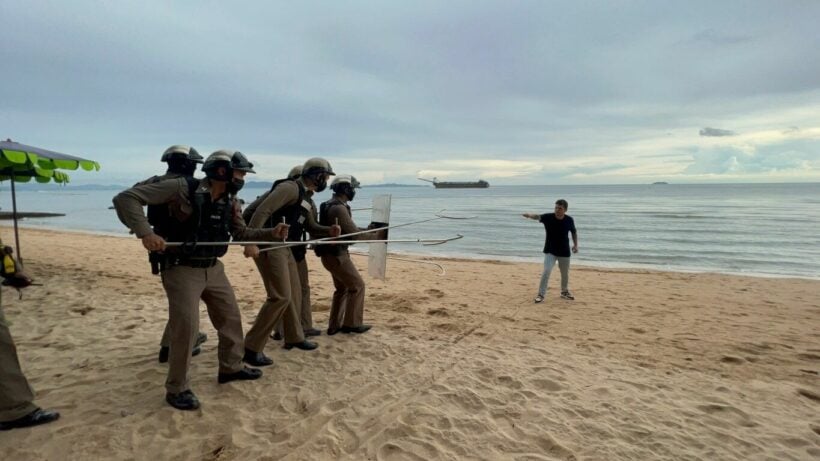 Pattaya police – armed with what look like giant litter pickers – gathered on Jomtien beach in Pattaya yesterday to prepare for encounters with “armed, drunk and aggressive foreign tourists.”

The police asked a foreign beachgoer to volunteer as an armed, drunk and out of control tourist. Half a dozen policemen behind a riot shield approached the “tourist” and pinned him to the ground with metal poles.

The “actor” didn’t put up much of a fight, so it’s not easy to say how effective the metal pole technique would be in a real-life dangerous situation.

However, the Pattaya police are right in having such low expectations of foreign tourists. Foreigners getting into fights, carrying weapons and overindulging in alcohol and drugs is nothing new in Pattaya.

Just a few days ago, a fight broke out between two foreign tourists near Walking Street which ended bloodily when one of them pulled out a knife and slashed the other’s arms. The man bled heavily but refused hospital treatment.

Last month, a foreign man violently assaulted a British man at a gym in Pattaya. After an argument about who was going to use the gym equipment next, the man smacked the Englishman in the head with a dumbbell, causing him injuries that required 60 stiches.

Chief of Pattaya City Police Kunlachart Kunlachai advises tourists to immediately call the police if they are a victim of a crime or face a confrontation. Don’t try and resolve the situation yourself, warns Kunlachart.

Upcoming Phuket construction project to be completed next year