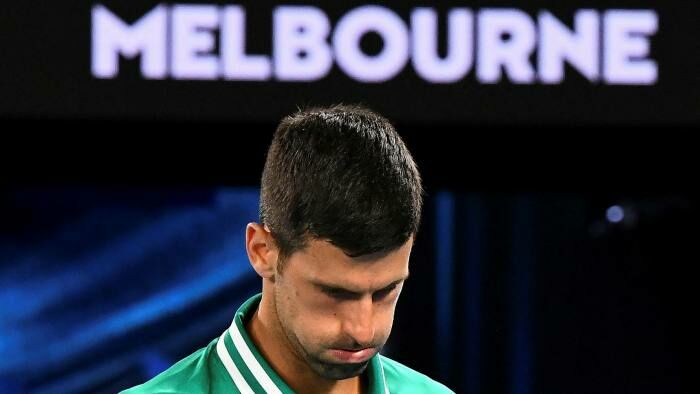 World Number 1 player Novak Djokovic tweeted a picture of himself standing with his team on a tennis court in Melbourne, Victoria late Monday evening, writing he was “pleased and grateful” that a judge overturned his visa cancellation.

Judge Anthony Kelly of the Federal Circuit Court of Australia had earlier ordered Djokovic’s release from an immigration detention centre in Melbourne, effectively allowing the tennis player to defend his title at the Australian Open, which he has won a record 9 times.

The Australian Border Force had detained the tennis star after his flight from Dubai arrived in Melbourne late Wednesday last week. He was held in an immigration detention facility until the judge ruled in his favour on Monday.

There is a chance that Djokovic could be deported before the tournament begins, or even face a 3 year travel ban for potentially violating immigration rules. Immigration Minister Alex Hawke still has the power to deport the Serbian tennis star and is expected to announce his decision soon. But as the tennis world holds its breath, the possibility of re-cancelling Djokoic’s visa seems increasingly unlikely.

When asked by SkyNews whether the tennis player’s visa should be cancelled again, Deputy Prime Barnaby Joyce replied, “That’s a question for the Minister.”

Regarding his earlier statements on the tennis player, Joyce admitted, “I got it wrong.”

“I thought it would be game, set, match that he hadn’t been double vaxxed and he would’ve been asked to go. And I’m not going to pretend to be a solicitor again.”

Meanwhile, the ATP has released a statement saying the Serbian’s detainment saga has been “damaging” for all.

“In travelling to Melbourne, it’s clear Novak Djokovic believed he had been granted a necessary medical exemption in order to comply with entry regulations… The series of events leading to Monday’s court hearing have been damaging on all fronts, including for Novak’s well-being and preparation for the Australian Open.”

The ATP further recommended all players on the ATP Tour to get vaccinated for Covid-19, stating “this is based on scientific evidence supporting the health benefits provided and to comply with global travel regulations, which we anticipate will become stricter over time.”

They also said that of Top 100 players, 97 percent have already been vaccinated ahead of this month’s Australian Open.

According to a Victoria government webpage set up for travelers regarding coronavirus immigration requirements, an overseas traveller seeking a medical exemption for vaccination must provide evidence of one of three case scenarios, including “a documented diagnosed COVID-19 infection confirmed by a PCR test within the previous six months.”

Djokovic, who was diagnosed with Covid-19 for a second time on Dec. 16, qualified for this medical exemption, which he received prior to boarding his flight to Melbourne. However, federal immigration agents at the airport disagreed with the Victoria-state issued documents and cancelled his visa, leaving the tennis star in a frantic state of deportation limbo.

This high-profile case highlights the discrepancies between state and federal jurisdiction in Australia regarding the implementation of various Covid-19 travel restrictions and how to implement them. Australian states and territories each have their own rules and regulations for travel during the pandemic, which last year led to interstate travel restrictions and separation of families, as some states imposed stricter lockdown measures than others.

Newly disclosed transcripts detail Djokivic’s tense interviews with immigration officers at early hours of the morning on Jan. 6. At one pivotal point around 4 a.m., he was served an official notice of intention to consider his deportation and given 20 minutes to provide further documentation — while unable to contact his team for help because he wasn’t allowed to turn his phone on.

“I am really failing to understand what else do you want me to provide to you,” a dismayed Djokovic said during the intermittent interviews. “I have provided all the documents that Tennis Australia and Victorian government has asked me to do in the last three/four weeks, this is what we have been doing.”

He stated that he is unvaccinated but had obtained a valid medical exemption from the Vicotria government and Tennis Australia to enter the country and compete in the tournament.

The tennis star’s travel woes further highlights the unique challenge professional athletes are facing in the age of covid.

In the US, basketball star Kyrie Irving was removed from the roster of the Brooklyn Nets at the start of the 2021-2022 season for refusing to get vaccinated after a New York City mandate required residents to show proof of vaccination in order to enter indoor facilities such as bars, restaurants and sports arenas.

Irving sat out the first 2 months of the season until Nets management eventually backtracked on their decision to drop the unvaccinated superstar, allowing him to play away games with the team in states with less strict coronavirus regulations. Ironically, his comeback to professional basketball on Jan. 5 took place while Djokovic faced deportation from Australia for his unvaccinated status after his flight arrived in Melbourne.

Although the tennis player’s reasons for not getting vaccinated remain unknown, Djokovic has previously suffered from various food allergies, sleep apnea and asthma early in his professional career, before eventually removing gluten, dairy, refined sugar and red meat from his diet. He has credited his sustained success on the tennis court to his switch to a plant-based diet.

Together with his high level of covid antibodies and incredible level of fitness, it’s safe to conclude that the tennis player does not pose a threat to fans at the tournament, only to his on-court opponents.

If he wins the tournament, the 34 year old will surpass his long-time rivals Rafael Nadal and Roger Federer as the greatest of all time, with 21 total grand slam wins.

Nadal, who is also in Melbourne to compete in the tournament, is vaccinated for Covid-19.

Nadal told spoke to reporters last week while Djokovic was being detained saying “there are rules”.

“And if you don’t want to get the vaccine, then you can have some troubles.”

Since his courtroom victory, Djokovic has again set his sights on claiming GOAT glory — on the tennis court.

“Despite all that has happened, I want to stay and try to compete in the @AustralianOpen,” he tweeted. “I remain focused on that. I flew here to play at one of the most important events we have in front of the amazing fans.”

The Australian Open is set to begin on January 17.