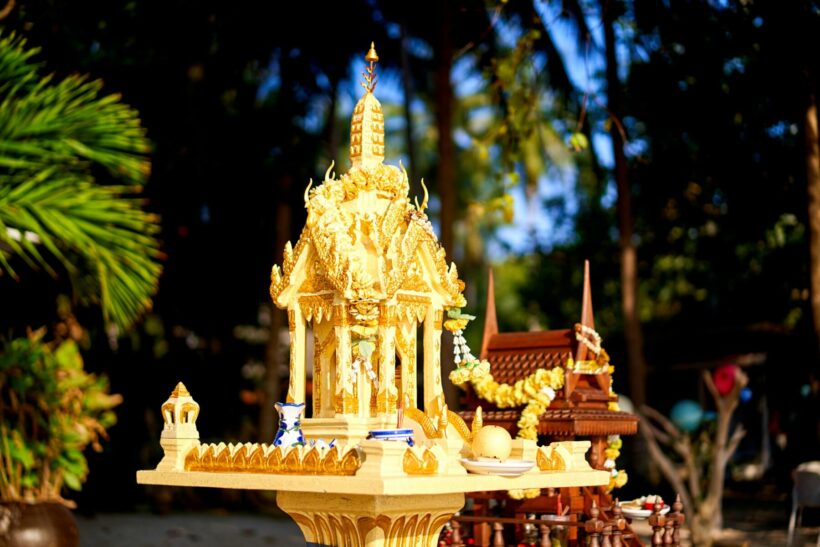 When travelling around Thailand, it’s impossible not to notice the spirit houses. Sort of like mini Thai temples. They can be found everywhere at every company, hotel, shopping mall, and even some people’s homes. It’s been part of Thai culture for centuries. You often see them with either food and drinks, or flowers and fruits made as offerings to the ‘spirits’. Some places have all of them.

The two most common spirit houses around Thailand are San Jao Ti and San Phra Phoom.

San Jao Ti is a traditional spirit house, it mimics an old Thai house. It’s built on one pillar and its stands higher off from the ground. There will be statues of an elderly man and woman, or grandfather and grandmother. Depends on how you want to look at it. This symbolises the ghosts of those who lived at the house in the past.

San Pra Phoom is home to the land’s ‘guardian angel’, and it’s built like a Thai temple. It’s larger and bigger than a San Jao Ti. There will be a gold-painted figure and the angel holding a sword and money. This type of spirit house will protect the landowners as well as providing wealth and good fortune to the inhabitants and visitors.

Before a ghost house is built, a Buddhist ritual is conducted first, where a monk or fortune teller reads an astrological chart. The colour of the house should be determined by the reading. Then a 2 metre deep hole will be dug, into which owners will place amulets, money and colourful stones. The monk will bless the location of the new spirit house, and incense will be burned to clear any negative energy.

They were once made entirely of wood in the past. In rural parts of Thailand, these original types of spirit houses can still be seen. These days, spirit houses are now built from metal and concrete, and shops mass produce them in large quantities. They come in a variety of sizes, with the largest being seen in office buildings and shopping centres, while the smallest can be found in family homes.

Vegetables, fruits and sometimes food are given to keep the ghosts and spirits happy in return for good fortune and protecting their property. Incense is lit right after offering food with the intention of removing negative energy. Most people pray for good luck while burning 9 incense sticks. In Thailand, the number 9 is considered lucky. Some Thais become anxious if they fail to keep them happy, or don’t treat the spirit house with respect, they’ll get bad karma in return.

You might have noticed lots of red Fanta bottles with straws sticking out of them. This isn’t because ghosts prefer Fanta over Coke, Mountain Dew, Pepsi or any other soft drink brands, or have a sweet tooth, but the red colour represents blood as a symbol of life. Animal sacrifices used to be conducted at spirit shrines in more ancient times. Fortunately, King Rama I declared the practice illegal, and people began to use red Fanta instead.

When staying the night in a new place, whether it’s a relative or friend’s house, even a staying at hotel on vacation, locals would say a prayer telling the spirits that you’re just a guest and you mean no harm.

It’s not important for foreigners to greet or wai a spirit home when passing by, or offer any presents. If you want to participate in the tradition, go ahead. Maybe check how the locals do it before giving it a try.

But it’s equally important not to make fun of the spirit houses. If you don’t believe in the Thai traditions or ghosts, then it’s better to just walk on by. Thais love to invoke the many stories about people who had bad experiences after they provoked the spirits. True or imagined, it’s all part of Buddhist and Thai culture and just another thread in the rich tapestry of the Thai way of life.