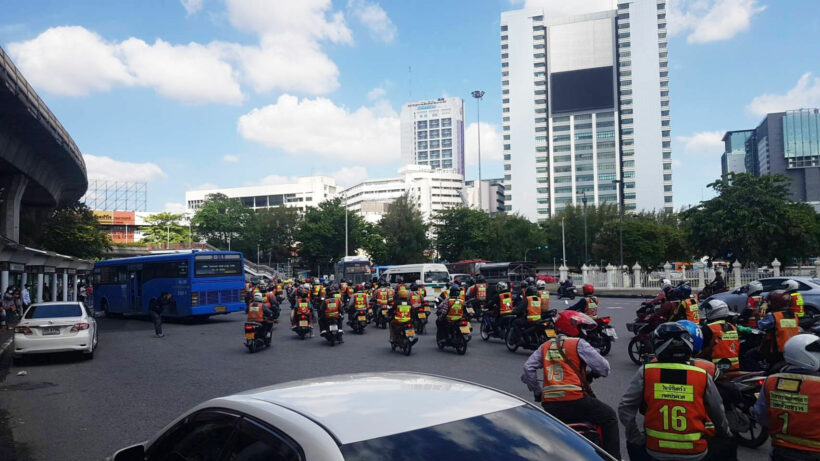 In Bangkok, “Win” motorbike taxi drivers in orange jackets have monopolised the streets for years, whipping customers from place to place in record time, until the arrival of the Grab. Today at 12.30pm, more than 150 Win drivers honked their horns outside the Ministry of Transport in Bangkok to demand the removal of Grab’s GrabBike feature, which they say is operating illegally.

Representatives from the Motorbike Taxi Association of Thailand organised the protest today, joined by hundreds of Win drivers. The Win drivers want to know what progress has been made in the ministry’s investigation of Grab, having expressed their dissatisfaction with the company several times before.

Becoming a Win taxi driver in Bangkok is no easy feat. Applicants must jump through several hoops – take tests, pay a lot of money for a permit and secure an orange vest, which can cost up to 50,000 baht in busy areas like Asoke. The area the Win driver must stick to is printed on the vest, along with their license number, helping to keep organisation and problems between ‘Win gangs’ to a minimum.

It takes time and costs a lot of money to become a Win driver, but the process is meant to ensure the safety of customers by only allowing drivers who know their stuff to zip people around the city.

But, GrabBike drivers are stealing Win’s clientele, and the Wins are not happy. Somehow, GrabBike drivers can skip past all the bureaucracy faced by Win drivers, so long as they have a driving license and a motorbike.

Grab has become a more popular option than Win for many Bangkokians and tourists alike for several reasons. Firstly, the price on Grab is usually slightly cheaper for the same journey, sometimes significantly for foreign tourists who often get charged ridiculous prices by Win drivers, who can set the price themselves.

Secondly, the convenience of Grab is unmatched. You link your bank account, tap in your location, and a GrabBike appears at your front door ready to pick you up in minutes. Moreover, you don’t need to try and communicate where you’re going, because it’s already on the map.

However, the onset of GrabBike is ruining the livelihood of Win drivers who have worked hard to earn their orange vest. One of the Win drivers said the protestors want to see proper enforcement of the law on Grab so that only people who are properly licensed can become motorbike taxi drivers.

Problems between Win and Grab have been going on for years. Grab drivers are sometimes attacked by Win drivers for picking up customers in their “area.” In 2019, three Win drivers were caught on camera beating up a Grab driver near Thong Lor BTS station.