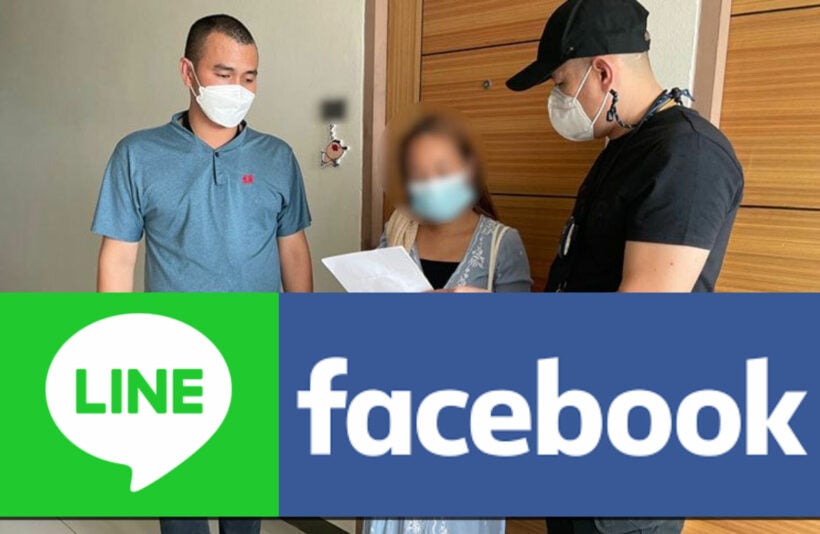 A 21 year old Thai woman was arrested by the Economic Crime Division for fraud, accused of hacking Facebook and Line accounts. The woman was arrested at Nornee Apartment building in Minburi in northern Bangkok after an arrest warrant was issued.

Police from the Economic Crime Division took the woman into custody at her apartment, accused of gaining access to people’s LINE app and Facebook accounts and using the accounts to borrow money from the victim’s friends.

The case alleges that she used the accounts to ask each contact from the hacking victims accounts to borrow 20,000 baht and gave them an online bank account to transfer the money to. Of course, she never paid back any of the money transferred.

The woman alleged to have admitted to pulling this online scam 150 times, getting unsuspecting people to think they were sending money to their friend in need, and collecting the cash for herself. The woman said it was her source of income, as she had no job, and that she used the money for her daily expenses.

The arrest follows investigations that began 3 months ago in July, when a victim filed a complaint with Yannawa Police. It is unclear how many victims filed police reports regarding being defrauded by the woman posing as their friend by hacking into their social media accounts.

If they woman had indeed succeeded in swindling 20,000 baht from 150 victims, the total profit from the hacking scam would be 3 million baht, though news media have reported a figure as high as 5 million baht in takings from her alleged scheme.