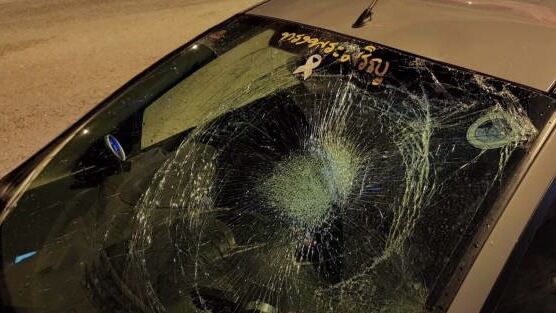 Contractors face a heavy compensation claim after a woman escaped death when some loose tarpaulin smashed into the car she was driving in Bangkok’s Bang Khunthien district.

The woman, Thichakorn Photalay, was driving down Rama II Road to her home in Samut Sakhon’s Mahachai area last night when a large piece of tarpaulin full of rainwater fell off an expressway construction site and landed on her car.

The 33 year old woman was lucky to escape with her life as the roof of the car caved in and the windscreen shattered from the weight of the tarpaulin.

He said accidents like this will continue because most tarpaulins are weighed down by rainwater and left balanced between expressway pillars.

Representatives of the contractor Pong-Pat Enterprise and Samut Sakhon Highway Department reported to Samae Dam Police Station after the accident and acknowledged charges and promised to compensate the couple for damages.

The officer who received the complaint from the victim made it known he will oversee compensation negotiations before concluding the case in line with the law.

Ironically, earlier this week, the Highways Department ordered a temporary halt to the construction of the elevated motorway, to allow inspectors to conduct safety checks after reports had been made construction materials had fallen onto passing vehicles.