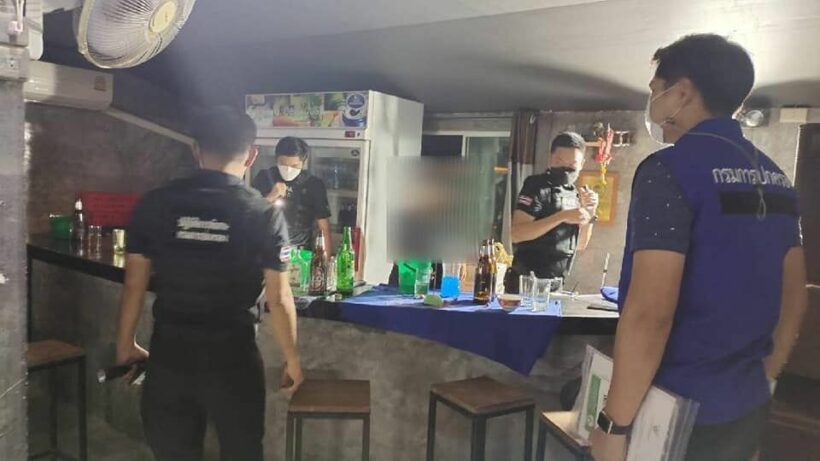 A Thai woman faces a ten-year prison term and a heavy fine after police raided a karaoke bar and found scantily-clad underage girls serving alcohol in the Lat Yao district of central Thailand.

Acting on complaints from residents nearby, officers from the Department of Provincial Administration (DPA) law enforcement team burst into the Ran Theederm karaoke bar at Moo 11 village in Lat Yao, and arrested the owner, Suwansa Kaewphinit, just after midnight today.

Police observed 14 teenage girls dressed in sexy underwear serving drinks, two of them under the age of 18, and entertaining guests.

Ronnarong Thipsiri, director of the operations team, and Lat Yao District Chief Watcharaporn Taenmee said one of the girls was 17 and another 15.

Police revealed the shop was previously run by the owner’s husband, 42 year old Nithiwat Rotjanasukkaset, who is in prison after he accidentally shot and killed a 15-year-old girl in January last year while playing with a gun.

Police charged Suwansa with operating the bar without a licence, selling alcohol after legal hours, and encouraging underage girls to act inappropriately.

The 43 year old woman could face other charges of human trafficking. The DPA’s law enforcement operations team believes six of the 14 girls have been trafficked.

Under Thai Law, Section 52, “whoever commits an offence of trafficking in persons shall be liable to the punishment of imprisonment from four years to ten years and a fine from 80,000 baht to 200,000 baht.”

An operator serving alcohol without a license can be fined up to 100,000 baht.