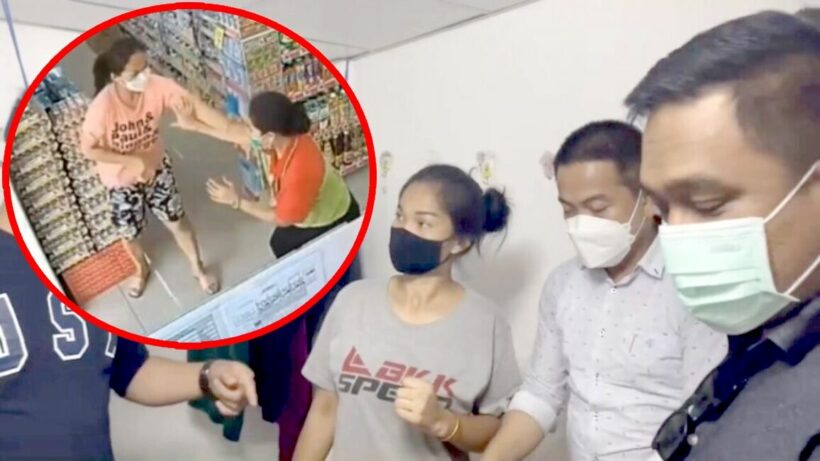 A woman was caught when she stole 59 baht worth of snack items at a Mini Big C in Nontha Buri, but things escalated quickly when she stabbed the employee that caught her to make her escape. The sad story took place on December 29, but after a warrant was issued for her arrest, police just managed to track the woman down and arrest her at Petchkasem Soi 81 when she stopped at a petrol station yesterday.

The 37-year old woman is a mother of 2 children and explains that she stole the food items because her children said they were hungry and she did not have any money. According to her, she was on her way with her 2 children to visit her new lover when the children started complaining that they were very hungry.

She stopped at the Mini Big C but did not have any money to buy them food. So she stole some jelly, a few bread items, and 2 bottles of soda to feed the hungry children. It was then that a 23 year old woman working for the store spotted her and stopped her for shoplifting.

The employee held the woman who stole the snacks and called the police but as they waited for the police to arrive the mother got antsy and looked for an escape. The desperate woman spotted a display selling knives and she grabbed one and stabbed the employee of the Mini Big C.

The woman working at the store was seriously wounded and the thief grabbed her children and ran out of the store. Police checked the CCTV footage and issued a warrant for the woman’s arrest. Now that she has been taken into custody yesterday, she faces charges for weapons offences, theft, and most seriously, attempted murder. Details on the condition of the store employee have not been released.

Herbal remedies tested up to 96% effective against Covid-19