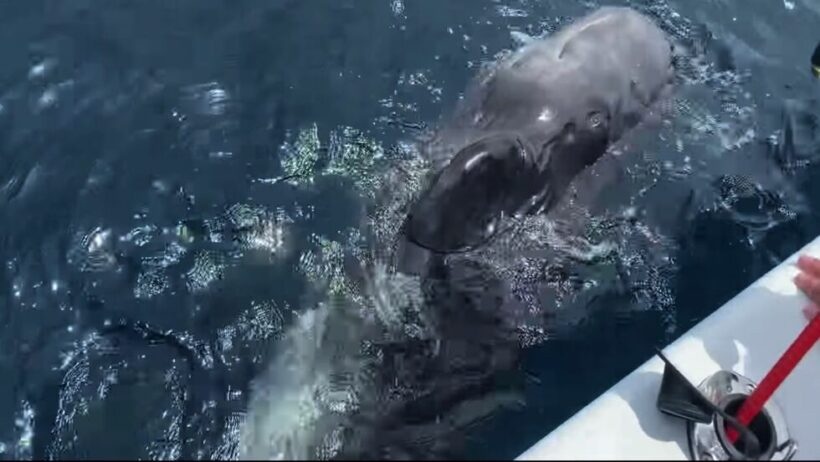 Another damning video is exposing the danger of Thailand’s pollution towards its wildlife, this time in Phuket. On Thursday, a fisherman spotted a young sperm whale stuck in rubbish near Phuket’s Racha Island. The fisherman, Pongsakorn Naksaard, posted a photo and 2 videos of the poor creature on Facebook. One of the videos shows the pile of rubbish more clearly.

The rough translation of Pongsakorn’s caption reads, “A baby whale was found near death near the island… The little one floated into the garbage pile”. Pongsakorn reported the whale to the Phuket Marine Office immediately, but the sperm whale had later disappeared from the spot where he saw it.

The chief of the Phuket Marine Biological Centre, Dr. Kongkiat Kittiwatanawong, told The Phuket Express that the centre rescued a young injured sperm whale that lost its mother last year. He said the centre released the little whale back into the sea near Racha Island, and the wale that Pongsakorn spotted might be the same one. Dr. Kongkiat added that he hopes the centre will find the whale soon to conduct a physical examination.

Pollution is a major threat to Thailand’s marine wildlife. Fishing nets discarded in the ocean often kill and injure animals such as dolphins and sea turtles.

Thailand’s world reputation as a tourist destination is another factor in ocean destruction. One wildlife hotspot, Maya Bay, closed for 3 years, and saw a return of several plant and animal species that had disappeared due to tourists overrunning the beach and adjacent areas. Before the closure, boats entering the bay, and anchoring, destroyed much of the natural coral.

Last week, Thailand’s Minister of Natural Resources and Environment listed several threats to the country’s oceans. These included pollution, deteriorating sea water quality, overfishing, and climate change. The minister said the MNRE is “in the process of accelerating conservation work” for Thailand’s oceans.